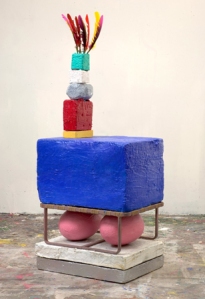 “Havilah,” as Mark Dutcher titles his first solo exhibition at Steve Turner Contemporary, is the name of an unincorporated community in Kern County, California, a former mining center now a virtual ghost town, itself named after a Biblical land known for its gold deposits. Dutcher, who grew up in Southern California and lives in Los Angeles, packs the show with such references to California’s social and cultural history, with four paintings and a sculpture taking titles from similarly collapsed Central Valley boom towns: Lost Hills, Arvin, Boron, Shafter. Containing fat squeezes of brilliantly colored paint, horizontal squiggles that refer loosely to the region’s desolate, bumpy landscape, the town-titled painting exude the rich, mineral scent of still-wet oil paint, as if offering a ghostly whiff of underground treasure. In contrast to the locations themselves, which most would see as lonely and barren, the paintings are vibrant, dense, gleaming and vivid. Perhaps they are inversions, or perhaps they faithfully represent the energy Dutcher finds in these out-of-the-way places, which, if poor in present population, are rich in past lives and narratives.

Other works in “Havilah” recall more recent aspects of the state’s past. “Sylvester (Do You Wanna Funk?)” (all works 2008), a giant X-shape decked with a rainbow of paint and a thicket of colored feathers, refers to the drag queen known as “the Queen of Disco,” a Los Angeles native who once said, “My life started when I moved to San Francisco..” “The Raiders,” a large silver-encrusted painting with a saw-toothed edge coated in glossy black, borrows colors from the Oakland football team—but of course, in light of Dutcher’s myriad references to California history, the title also calls to mind the act of mining, as well as skirmishes between settlers and Native Americans. Feathers, that automatic symbol for Native Americans, figure in other works, too, including “Three Men,” a sculpture that reads like a three-dimensional version of a Philip Guston painting, with twin pink balloon forms resembling feet, and a blocky “body.”

Considering how Dutcher delights in symbolism, how he traverses the edges of abstraction and representation, it’s no surprise to learn that Guston has been a formative influence on his practice. For while Dutcher’s paintings and sculptures possess surprising compositions and electric color combinations, and can work as pure abstractions, they are above all symbolic, suffused with signifiers that range from cryptic to obvious. His earlier work frequently contained floating images of everyday objects, often depicted with a deliberate naiveté, a paucity of definition, just enough for the brain to make the connection with reality. One memorable motif was the rag rug, which, because it is woven from discarded clothing of people who might no longer be living, Dutcher envisioned as a portal to the afterlife. This type of metaphor, poignant, strange, and magical, abounds in Dutcher’s work, and helps explain why he’s one of the most interesting painters working today in California.

“Havilah” finds Dutcher’s symbols coalescing into the X-shape, a kind of uber-symbol that works as a gesture of both discovery and erasure. “X” is a crossed-out idea, but it’s also a trope of treasure maps, as in “X” marks the spot. The large, gold, glitter-encrusted “X” forming the centerpiece of “Total Eclipse,” for example, calls to mind a prospector shouting eureka. “X” is also the shape of a disco dancer, legs spread and arms in the air—a fitting form for an homage to Sylvester. And, of course, “X” is shorthand for expiration, for death, “X”s in the eyes being cartoon language for a corpse. Dutcher’s work, in fact, for all its exuberance and unrestrained delight in texture, color, and form, quite often meditates on loss and grief: he has made paintings of cabinets containing objects that memorialize lost friends, and his 2006 show at the Santa Monica Museum of Art, “Gone,” was centered around imagery inspired by The Chapel of Chimes, a columbarium in Oakland. “Havilah” is no exception. Sylvester died a victim of the AIDS epidemic, and the Kern County towns, while not wiped from the map, are after all ghost towns, husks of the places they were at the height of the Gold Rush. What disco queens and boom towns have in common is an especially bright-burning period of life, which death only throws into relief. Life as a flame contained, but also intensified, by surrounding darkness; the cycle of creation and destruction; the interdependence of beauty and mortality—this might be well-traveled territory in art, but Dutcher’s work explores it brilliantly, with a sensibility that is unexpected, original, and poetic.