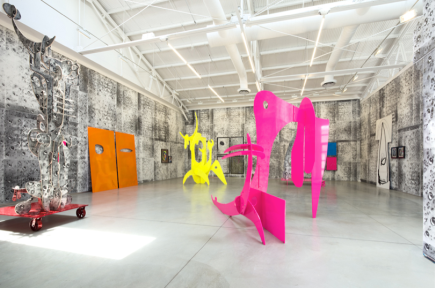 “Two Sheets Thick,” the title of Aaron Curry’s second solo show at David Kordansky, contains the idea of strata, taking its name from a torn paper collage in which he has peeled back sections of foreground to reveal underlayers. Dimensionality and obfuscation, two more of Curry’s preoccupations, also coil within this three-word phrase. Such tight packaging is typical of an artist who, rather than setting out on meandering investigations, seems to work by letting ideas ricochet in a compact space between fixed parameters.

As in previous exhibitions, Curry’s troupe of collages, screen prints, and large, part-playful, part-menacing powder-coated aluminum sculptures are closely interconnected. For one thing, they all adhere to a restricted palette of DayGlo rainbow colors plus black, white, and mud brown, a jumpy mix encapsulated in the found images appearing in Curry’s collages, including an ad for Pixar’s Monsters, Inc. (Vision Revision (Donkey Lady) [all works 2010]) and a flattened Cocoa Rice Krispies box overlaid with Jan Davidsz. de Heem’s lurid seventeenth-century Festoon of Fruit and Flowers (Two Doors Make a Face). Heightening the show’s feel of cohesion and enclosure, the entire gallery is papered with cardboard panels screen-printed with a pattern of moisture beads, as if the walls are sweating or slick with condensation.

Beaded liquid—a recurring motif in Curry’s work, along with faces and figures that slither into abstraction—is a good metaphor for the way artworks coalesce, with rivulets of influences, fascinations, and accidents converging into organized forms. The discrete final works, spaced out in the gallery, echo the arrangement of the scattered droplets. With Curry, the essential solution generating his artwork, too, has remained notably consistent. Girding his practice are affinities with, among others, Picasso, Isamu Noguchi (particularly his biomorphic sculptures from the 1940s, which Curry’s sculptures made of flat, interlocking parts closely resemble), the Chicago Imagists—an influence visible in Curry’s offbeat, vibrant colors and allusions to grotesque portraiture—and camouflage. In previous work Curry borrowed the WWI-era technique of painting battleships in garish patterns designed to confuse enemy eyes rather than blend into the sea—here he reprises the theme by covering several sculptures with the same droplet screen prints that paper the gallery walls.

While Mammut, a vivid pink sculpture that from one vantage point describes a mastodon, perhaps one resurrected from L.A.’s tar pits, and Bcklmnmppe, a lemon yellow giant that flickeringly resembles a horned emperor (its title has something to do with the experience of circling the sculpture, with spaces collapsing like dropped vowels) shout their presence, Curry’s camouflaged pieces disappear into the background, save for their candy-colored wheeled pedestals. The wheels, unexpectedly painted, lend levity and a flourish of showmanship, as if the sculptures were shy circus animals parading through on carts—they tap into the work’s undercurrent of absurdity. They’re also a particularly successful patterning device, echoing the exhibition’s many other circular forms, such as rivets, egg shapes, eyeholes, facial outlines, and of course the droplets’ dollops of white highlight circled in black, of which the googly-eye cyclops in Monsters, Inc. is a perfect example. Takashi Murakami’s Jellyfish Eyes wallpaper of 2002, in which hundreds of disembodied eyeballs stare out at the viewer, also comes to mind. Figuration is another of Curry’s obsessions: look at just about any work, and some relationship to the body, however distorted, begins to emerge. There’s an ease and familiarity to this kind of verging anthropomorphism. And yet the border zone between abstraction and representation is a fitting place for Curry to camp, given that slippage, including free slides through cultural and historical strata, is integral to his art.

In the midst of Curry’s brilliantly mapped, all-cohering environment, you wish sometimes for a breeze, some whiff of randomness. Maybe it’s that the few reckless moments—the smeared areas of paint in the collages, streaked ink on the cardboard screen prints, the macho signatures on the sculptures, lettered in liquid metal—seem contained, like counterweights that only further balance the system. You want to see what happens when the beaded liquid runs down the wall, in unpredictable patterns that crack the door wider to chaos. There’s nothing wrong with a taut system, but sooner or later, you hope to see it enlarge and relax.